Social Entrepreneur and Development Expert Abdullahi Idris Turaki, has urged youths in the country to imbibe the spirit of discipline, nationalism and patriotism to reposition themselves for active participation in nation building.

Turaki gave the charge while speaking at a symposium themed, “Changing the Narratives on Youth Participation in Nation Building” on Saturday in Lokoja.

The symposium was organised by Shinany’s World, an entertainment and fashion Initiative under its “One Stage-One-Mic” programme in collaboration with the Students Union Government (SUG) of the Federal University, Lokoja.

The Guest Speaker who is also a Policy Expert said that most of the pitfalls and challenges of the country were direct consequences of lack of discipline, nationalism, patriotism and ideology among the people.

“The overall key to positioning yourself for active participation in nation building among all these, is discipline. Discipline is what is going to separate you from the rest and distinguish you.

“Discipline is the crux of all of this. Discipline is what is going to separate you from the rest and distinguish you. We need to discipline ourselves to the core”, he said.

The Guest Speaker said there was need for Nigerians to stand for what is right and revive their nationalistic and patriotic spirit which according to him, is presently very weak and almost dead.

Turaki urged the Nigerian youth to be driven by ideology, stand for what is right, be passionate about their dreams, be consistent, develop culture of excellence and diligently seek knowledge. 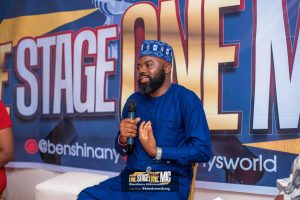 He also urged them to abhor idleness, be audacious, bold, courageous, take advantage of the ICT, Internet and advancement in technology and always be focused.

“The ability to remain focused is the difference between being poor and being rich. Once you are focused there is nothing you cannot achieve in this world”, he said.

Speaking earlier, the convener of the symposium, Mr Beanard Ajewole urged the youths to imbibe the “Can do spirit” to develop and prepare themselves for the task ahead rather than wait on government.

He said that the event was put together by “Shinany’s World”, an entertainment and fashion brand committed to changing the narratives and re-orientation of young people on personal growth and development.

“We tell students what life really is beyond the four walls of the classroom and the things they need to know and do even while in school to brighten their chances in this competitive world, to better their tomorrow”, he said.

The News Agency of Nigeria NAN reports that the event featured presentation of awards including school fees for the next academic session to undergraduate students as well as consolation prizes.